Imagine a child having recently been discharged from hospital sneezes loudly while playing with her pet dog. The child notices the worried expressions her parents faces having seen her sneeze and she becomes afraid of being sent back to hospital because for being ill. This situation has inadvertently sensitised the little girl’s protective sub-conscious mind against playing with dogs and from this time on, each time the child plays with a dog she has a sneezing fit. This sneezing fit is identified as an allergy. Later this allergy spreads to other pets such as cats.

Using hypnosis, it’s possible to rapidly retrain the sub-conscious mind so that it no longer perceives specific situations as a threat to the point that allergies are no longer a concern.

There is a growing body of research into hypnosis and allergies. Here is an abstract from Swiss research and an article I found about it:

Hypnosis and the Allergic Response

In recent years our knowledge of the immune system and the pathogenesis of immune disorders has increased. There has been much research on the complex connections between the psyche, the central nervous system and the immune system and the effect of mood on disease processes. This paper reviews the evidence on the effects of hypnosis on the allergic skin test reaction, on allergies, particularly respiratory allergies and hay-fever, and on bronchial hyper-reactivity and asthma. Hypnosis, which is generally regarded as an altered state of consciousness associated with concentration, relaxation and imagination, and amongst other characteristics an enhanced responsiveness to suggestion, has long been thought to be effective in the amelioration of various bodily disorders. It has seemed that the state of hypnosis is capable of a bridging or mediating function in the supposed dualism between mind and body. There has been great variation in the experimental and clinical procedures such as type of hypnotic intervention employed, the training of subjects and the timing of the intervention. Also, variability in the type of allergen used and its mode of application is evident. But despite these limitations, many of the studies have shown a link between the use of hypnosis and a changed response to an allergic stimulus or to a lessened bronchial hyper-reactivity. There is as yet no clear explanation for the effectiveness of hypnosis, but there is some evidence for an influence on the neurovascular component of the allergic response. 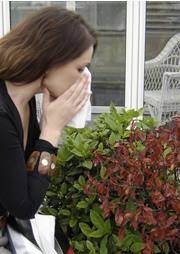 Sniffles be gone: self-hypnotism may provide a partial cure to hay fever.

People itching for a solution to seasonal allergies could get help from self-hypnosis, a team of Swiss researchers suggests. The study finds that simply focusing one’s thoughts on allergen-free environments can reduce symptoms of hay fever by one-third.

Although the arrival of spring brings better weather, it also triggers the release of plant pollens that cause allergies. Hay fever affects about 10-15% of adults in industrialized nations. To treat this, people turn to medications such as antihistamines, decongestants and sometimes steroids. But these can cause side-effects such as drowsiness, a dry mouth and raised blood pressure.“We felt that the results were encouraging enough to tell people to try it, because this intervention is free of side-effects.”

Allergy sufferers have sought alternatives approaches, including psychotherapy-related methods, to ease their itchy eyes and runny noses. Wolf Langewitz of the University Hospital Basel, Switzerland, and his colleagues sought to find out how well self-hypnosis works.

To achieve successful results using self-hypnosis, says Langewitz, one must first enter a trance-like state and then focus the mind on a particular theme. The whole process, he adds, can take as little as five minutes.

The team recruited 79 patients with moderate to severe allergic reactions to grass or tree pollen, who then received training on self-hypnosis.

The Swiss researchers instructed the participants to imagine they were in a place where allergies do not torture them, such as on the beach or the ski slopes.

Langewitz encouraged his patients to think about “glittering snow crystals”, chilly temperatures and other snowy phenomena, in order to tap into as many channels of perception as possible.

About 40 patients stuck with the regime for roughly two years, and were tested for their biological response to allergens: they were exposed to pollen and their congestion was assessed using a device that measures airflow through nasal passages.

The participants were tested twice: once in the absence of self-hypnosis, and once after practising this form of therapy. Their symptoms, as measured by the congestion test and from simply asking the patients how they felt, dropped by a third thanks to hypnosis.

Kathleen Sheerin of the Atlanta Allergy and Asthma Clinic in Atlanta, Georgia, says the study is interesting, but she adds that patients may have been more influenced by their belief that the treatment would work than by the hypnosis itself.

Langewitz admits that the findings are preliminary and a bigger study is needed. But, he says, “we felt that the results were encouraging enough to tell people to try it, because this intervention is free of side-effects”. Sheerin adds that the treatment may have other benefits: “Some people can’t afford the medicine.”